Favorite theater roles include: Point Last Seen (Atlantic Stage 2), Three Women in Indecision (The Kraine Theater), God of 16 Acres (Atlantic 453), Happy Journey from Trenton to Camden (Atlantic Conservatory), The John Wayne Principle (The Ohio Theater), and Antigone (Nashville Shakespeare Festival) among many others. Ms. Alexander can be seen in the film Choke (Sundance Grand Jury Prize, 2008). Television roles include Law & Order and Dickens in America (BBC Scotland). She received her BA from Brown University and completed the Conservatory Program at the Atlantic Theater Company Acting School where she now teaches Script Analysis and Performance Technique.

Sarah hails from Minnesota where she began studying and performing theatre at Minneapolis’ Stages Theatre Company and the Tony Award winning Children’s Theatre Company. Sarah received her BFA in theatre from New York University’s Tisch School of the Arts, spending a semester abroad in Ireland with Trinity College. Upon graduation Sarah received NYU drama department’s award for Outstanding Classical Actress. Since then she has been performing in New York and around the country including two national children’s theatre tours, the Atlantic Theater Company mainstage (Strega Nona) and many downtown Off-Off Broadway productions. She joined Cake’s staff after appearing in Modern Dance for Beginners, and has since performed in Cake's Psych, Speaking in Tongues, Swimming in the Shallows and In the Company of Jane Doe. Sarah draws on her experience interning in Company Management at the prestigious Guthrie Theatre to perform her role as Cake’s General Manager.

Francesca founded Cake Productions in 2009 with Marta Kuersten and has been an active member ever since. Credits with Cake include: Modern Dance for Beginners at the Cherry Lane Studio Theater, Psych at The Paradise Factory Theater, Speaking in Tongues at New York Theater Workshop’s 4th Street Theater, Swimming in the Shallows at the 52nd St Theater and In The Company of Jane Doe at New York Theater Workshop’s 4th Street Theater. Other theater credits include: As You Like It at RSC’s Dell Theater in Stratford, The Rutgers Classical Showcase at Shakespeare’s Globe in London, Baby Boom at the George Street Playhouse Studio, Titus Andronicus at the Arclight Theater, The Sandman with Terra Firma Dance Theater. Film credits include: “The Orange Paper,” “Mud and Roses,” and “Leaving Circadia,” among others.  She is also a stand-up comedian performing throughout the US. She holds a BFA in Acting from Rutgers University, and a MA in Classical Acting from The Central School of Speech and Drama in London.

After a sweet haul of kids' shows with Atlantic For Kids (Miss Nelson is Missing, The True Story of the Three Little Pigs, The Hundred Dresses) and Mr. Urcioli (Sign-arella, IRT), Janna is excited to be part of a production where people kind of curse and talk about sex. Thanks to Ateh and Cake for welcoming her into the fold.

Marta originally hails from Chicago, and is a graduate of NYU’s Tisch School of the Arts, where she studied with ATC and RADA. She has appeared in New York with theatre companies such as Milk Can, Inverse, RoundTable, (re:)Directions, and others. Favorite productions include Comedy of Errors with Lake George Theatre Lab and Really Rosie with Atlantic Theater for Kids. In 2009 she co-founded Cake Productions with Francesca Day, with the goal of bringing high-quality, accessible theatre to off-off-Broadway venues. She went on to star in Cake’s first show, Modern Dance for Beginners, which had its New York premiere at the Cherry Lane Studio Theatre in July 2009. She made her directorial debut with Cake’s next full-length production, Psych in May 2010; other credits with Cake include Speaking in Tongues, Swimming in the Shallows and In the Company of Jane Doe. She has hosted monthly segments for the Epix channel on Dish Network, and provides voice overs for MLB.com and the Ice Network.

Alyssa is a versatile character actress, improviser, and writer.  She can currently be seen performing original pieces with Nerds on Fire sketch comedy group.  She holds a degree from the University of Virginia.  This is her second production with Paul and Ateh, having played Evelyn in Sara Montgomery's Weekend at an English Country Estate.  She is grateful to be reunited and to work with Cake.  Visit her at www.alyssalott.com.

Madeleine is a founding member of the Ateh and has appeared in their productions of Weekend at an English Country Estate, The Girl in the Flammable Skirt, The Girl Detective and Mr. A's Amazing Maze Plays. This summer she can be seen in Boeing-Boeing and Other People's Money at The Barnstormers Theater in New Hampshire where she has also performed as the Woman in The 39 Steps, and Romaine Heilger in Witness for the Prosecution. Favorite past productions include The Tragedy of King Arthur with Guerrilla Shakespeare Project, The Importance of Being Earnest with Counting Squares Theater, Bloody Mary and Barhoppers with Third Man Prod, Alice’s Adventures in Wonderland as part of the Atlantic Theater Kids Season, and Real by Bekah Brunstetter. Madeleine is a graduate of NYU's Tisch School of the Arts where she studied at ATC and RADA. Madeleine is exceptionally excited to be working on this hilarious play with Paul and this amazing cast. 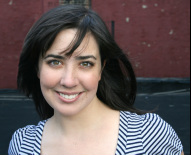 Sara's acting credits include Mr. A's Amazing Maze Plays, Long Distance, The Girl Detective, Alice's Adventures in Wonderland and The Girl in the Flammable Skirt (Ateh); The Argument (Attic); Barack & Me and Nobody Likes the Mormons (Ars Nova); Animal Farm (Synapse Productions); I Have Loved Strangers, Triangle, and Spring Awakening (Williamstown); The Amazing Adventures of Arthur McGilligutty, Grimms' Tales and The Little Prince (Atlantic Theater for Kids); Ula: A Dream Play (Phil Bosakowski); The Library Play (John Houseman Studio); and Johnny Panic and the Bible of Dreams (PS 122). She has toured nationally with American Family Theater's production of Cinderella, was a regular actor and contributor to Barhoppers with Third Man Productions and most recently performed in Heroes Journey, an interactive epic adventure featured at Figment Arts Festival.  As a playwright, Sara is author of the award nominated Weekend at an English Country Estate, in which she also appeared. She is a graduate of NYU and a founding member of the Ateh Theater Group.  Check her out at www.saramontgomery.com.

Elizabeth is thrilled to be part of this co-production with the lovely ladies of Cake.  Elizabeth is a founding member of the Ateh Theater Group, where she has performed in Weekend at an English Country Estate, Mr. A's Amazing Maze Plays, The Girl Detective, Long Distance, Alice's Adventures in Wonderland and The Girl in the Flammable Skirt. Other credits include The Island, The Life and Death of King John, In the Company of Jane Doe, Decadent Acts, The Wellesley Project, Romeo and Juliet, Abraham: A Shot in the Head, Grimms' Tales, Phantom Tollbooth, 7 Blowjobs, The Little Prince and Johnny Panic and the Bible of Dreams. Elizabeth is a graduate of NYU.